When I stepped outside this morning (around 8.00 am), my eyes was caught up by a sudden fly of a quite large, beautiful butterfly from a pot plant at the front garden. Its’ fly was quite unusual. I got struck from what I then saw….. It soon settled on the short trunk of the star-fruit tree. Then to my surprise it suddenly looked like a dead leaf.

What is it really .. something i wanted to look at soon ….

but i had to be patient… capturing it digitally would take my time .. oh .. but i can’t miss this mysterious creature …. I was sure that it would be something NEW for my ‘nature list’ !

So, I waited and see. no movement thereafter … that big butterfly i saw just a while ago. Who is this really? my mind was full of curiosity…. I was quick to bring my camera in the mean time.

Soon after I was back near the tree, it again flew to a quite tall flower tree just next to star-fruit tree. I knew I have to give sometime for it to calm-down because it looked disturbed. So, I waited some more time and then started looking for it. Unless I saw earlier how it looked like after perching on the tree trunk (as it was like a dead leaf ), it would be almost impossible for me to spot back again. Ok… here i go… the moment has come .. it was very quite .. but i had a greater difficulty to spot it through camera lens as it just looked like a dead leaf of the same tree.

Oh my …. hang on …. is this the same one i was looking for … Through my camera lens, I saw something quiet large brown bubbles, hmm..yes..those must be the two eyes … and a small head hanging down from a leaf …

However, it was not possible to take a full picture by the way it had settled on the leaf. Of course, it looked very comfortable in that position. On a side, its upper wings looked pale brown and its veins on the wings were clearly noticeable to camera zoomed lenses.

Then by accident, I happen to pull a branch of a tree, a little too much for it, while capturing an image. Oh it flew away… then oh wow …that beautiful butterfly is back. Those brilliant yellow wings !!! Amazing creature … i can’t imagine the reason for it to hide its wings this much, probably because of the predators and it was the day time … it was very easy to spot than a butterfly when flying. It was as such only when it was flying …..

I was fortunate to capture its lower-wings after much struggle .. but still I missed a photo of its bright yellow wing colour which i saw soon after it perched on, but soon before closing the wings…. It kept its wings in a vertical manner for about three seconds before closing off. Luckily the above photo i took captured its colours to some extent at least…. otherwise, I would not be able to write this story with this enthusiasm.

Let me show you a close-up of it now. You would see the tiny bat look of its face and some tiny legs with two short thick antennas placed like a nose near its large eyes with a brown cover… and what’s more .. you see two ears ???? I am still in puzzle after seeing its two ears and the tiny leg on each side… it was definitely not a butterfly feature…. It should be a moth .. A BAT MOTH …..

Would love to hear any similar experiences …. thanks for the time spent in reading .. I feel i added some value to the story by sharing with you the pictures captured hard way.

After some background research, i was able to find out its good name; Common Fruit-Piercing Moth ( Eudocima phalonia ) . My puzzle was solved to some extent by its name … no wonder why it perched near by a star-fruit tree during the day time. But i would welcome it again …. 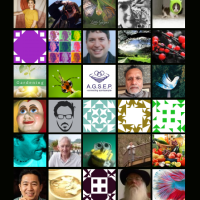 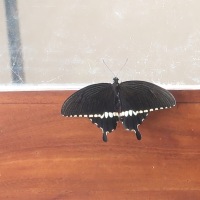 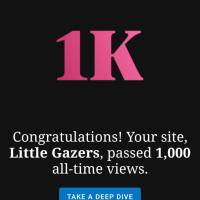 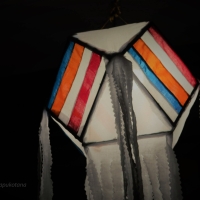